This very high-level description of what Matrix can be. Currently boils down to one of the most innovative and fast growing chat ecosystems in the world. Due to its federated nature it becomes a natural choice when it comes to projects that want to collaborate across the borders of organizations. This alone makes it a perfect fit for free software projects and is probably the reason why nowadays major free software organizations like GNOME and KDE as well as Mozilla opted for Matrix instead of walled garden solutions.

Main advantage of matrix is that channels don’t rely on the right servers to be up. As long as your “homeserver” (that’s basically your matrix account provider) is online, you can talk to the room. The homeserver will take care of informing all other homeservers that participate in the room about your messages. By default messages won’t be encrypted, which is no problem for public rooms. For private messages or closed groups on the other hand, you might consider this a problem. As soon as cross-signing lands in the stable version of Riot (that’s the most used, but not only client for Matrix), this will change at least direct chats should be encrypted by default as you might know it from messenger like signal.

As part of the Shivering-Isles I run an own homeserver and founded various channels to the ecosystem as well as providing a room list of well-selected channels. But to make them easier to discover I provide this page which gives a little insight about channels I founded and what to expect from them.

My main room is the “living room”, also called “Random talks with Sheo”. As the name indicates it’s my personal playground and I’ll share all kinds of things there. You can join you can leave, but if there is anything you want to say or ask, that’s probably the place where someone will answer. 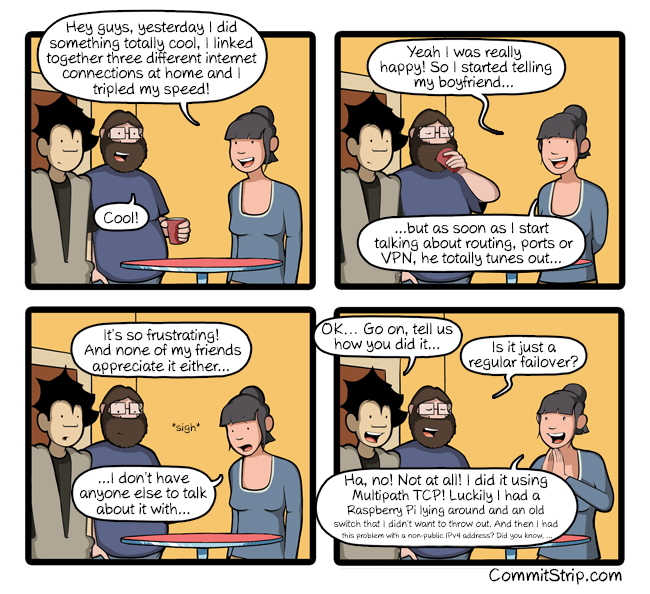 It’s a diverse set of people who met me in one way or another over the internet. As in the CommitStrip above this group of people that shows interest in stuff I build or talk about but also has a lot to share by themselves. It’s also the room that is referenced in most of my projects as it uses the alias #sheogorath:shivering-isles.com.

If you ever want to talk about OCI-containers or container-engines, this is your place to hang out. From docker over podman to kubernetes you’ll probably find someone to talk with in there. Wondering how to build a CI integration for your image or want to check for additional hardening you can do with your containers? This is your place. You can find it using the alias #containers:shivering-isles.com.

As the name indicates this a German-speaking room. It’s called “Philosphische Verwirrungen und andere Debatten” and provides a great place to have philosophical debates about topics that are probably off-topic in other, more tech-focused, rooms. Expect long messages and getting into various different areas of a discussion. There is a lot to debate, a lot to learn. Don’t expect to get out there “victorious” but with new insight into a topic. The alias to join this channel is: #philosophie:shivering-isles.com

There are some very basic but probably necessary rules, which apply to all rooms mentioned above.

Those rules are very basic but my experience showed me that various people on the internet don’t seem to make it to live with those without having them explicitly written down. So far there are no bans in the rooms I maintain and I would prefer it when it stays this way. But I’ll not hesitate to use bans if you either seem to intentionally breaking those rules or continue breaking them after being pointed to them.

All in all it’s a great and peaceful environment and I hope you enjoy your stay.

PS: Want to get started and don’t know how? Check the Riot.im features page, it should be a good point to start.

Photo by Robert Bye on Unsplash